Since 1891, there has been a Lubbock High. As we walk down these halls everyday, it is important to know of the rich history behind the school.

In the Early history of Lubbock county, when the townsites of old Lubbock and Monterey were still rivals, there was no established school.

In 1891, the two rival towns merged, and the first Lubbock school became a reality. The school announcement offered, “Schooling for all who could reach it by pony, wagon, buggy or on foot.” Enrollment in the new school grew to 360 students in 1909, and the three-room building was badly overcrowded. In March 1909 the need for a new school became even more pressing. Fire destroyed the building. The boys who began the fire hoped to end school in Lubbock permanently, but were successful only in postponing it until the fall. A group of five were the first to graduate from Lubbock High when it first became an accredited high school 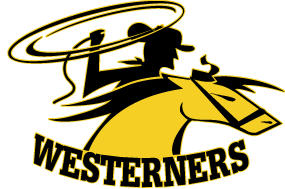 In 1922, although the school mascot was a Westerner, the football team was named “The Pirates.” In order for an out-of-town team to come to Lubbock, the school had to agree to pay for transportation, a private meal, and first class accommodations.

1929, enrollment approached 500 and the overcrowding was so serious that the high school was threatened with the loss of accreditation.

In the fall, plans began for the construction of a new high school, which took three years to complete. During 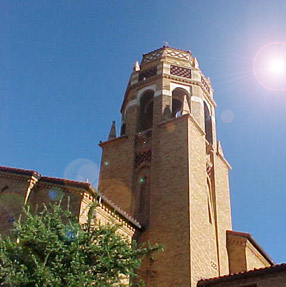 that time, it was necessary for many of the grades to go half day. The headlines of the Westerner World on April 1,1931, read, “Lubbock High School students to move desks.” The story read, “On account of a delay in getting the furniture from the old one will be moved by the students. Starting at 9 a.m. Monday, each pupil will carry his desk or chair and four students will be assigned to move each teacher’s desk.” This story continues today even though it was an April Fool’s story.

Graduates of Lubbock High School per year
No record for unlisted years.

At the school’s main entrance rides the cowboy, symbol of the Westerner. 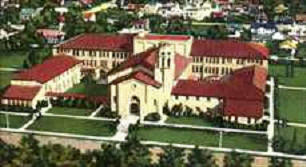 In 1891 Miss Minnie Tubbs opened the first school in Lubbock. She had fifteen pupils whom she taught in a store located on the southwest comer just east of the present city square.

P. F. Brown established the second school in Lubbock in 1892. Those who succeeded him in conducting the one teacher school were C. F. Stubbs, Mrs. Lee K. Anten, M. N. Park, and A. J. Clark. An assistant was hired for Miss Laura Davis in 1898 and one room was added to the building. Miss Davis was followed by George R. Bean, R. R. Holland, B. N. Graham, Ed Couch, and W. S. Norton.

The first independent school district in Lubbock county was formed on April 14, 1907. It had a ten mile radius which included the town of Lubbock.

The first superintendent, Mr. E. R. Haynes, was hired in 1907. After the original building burned 1S09, a new building was erected. It was
lo­cated just south of Burrus elevators. That fall Mr. G. N. Atkinson came to Lubbock and served as teacher in the eight room frame building.

In 1909 bonds worth $25,000 were issued and a brick building with two stories and a basement was bui’t. This building was located on the site where the present Sears, Roebuck and Co. now stands. Mr. J. K. Wester became superintendent in 1910 and Mr. G. N. Atkinson became high school principal. It was during this administration that the standards of the school were raised from those of a second class school to a first class rating. It is interesting to note that our high school has had only three principals, Mr. Atkinson who served until 1926,
Mr. R. W. Matthews, from 1926 to 1944, and Mr. Floyd Honey who assumed the principalship in the fall of 1944.

In 1922 a bond issue provided for a new high school. This school of 28 teachers was located between 13th and 14th streets in the 2000 block.

Bonds were voted in 1925 for the addition of two study halls.

Principal G. N. Atkinson became acting superintendent after the death of Mr. Dupree before the close of the 1925 term. In the fall of 1925 M. H. Duncan became superintendent. During his term public speaking v/as added to the curriculum, and three supervisors were added to the staff.

Construction of the present high school building was begun in 1930, and the structure was completed in time for the fall semester of 1931. In the fall of 1934 Dr. Kenneth E. Oberholtzer became superintendent In 1937 Dr. W. B. Irwin was elected to this position, being followed by R. W. Matthews in 1942.

The metal shop was added in 1942-43. The year 1949 saw the completion of an east v/ing begun in 1943 and housing fourteen new classrooms and offices. Also completed at this time were a bandroom, an agriculture room, a girls’ gym, and a cafeteria.

Athletics were first introduced into L. H. S. in 1910 when J. E. Vickers and C. C. Lester organized the first football team. In 1915 the student body chose the name WESTERNERS for the school and in 1920 black and gold were selected as school colors.

At the present time Lubbock High has 67 affiliated credits. The growth of Lubbock Senior High School is reflected in the following statistical report showing the number of graduates each year. 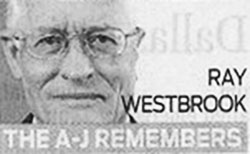 When members of the class of 1960 walk into Lubbock High School on Oct. 2 during their 50-year reunion, they will be looking at a masterpiece of architecture and construction, but they will also be seeing the legacy of D.N. Leaverton.

Leaverton, who had come from a saw-mill business in East Texas, had no experience as a contractor. But he brought his family to Lubbock in 1923 because he heard a college would be built a couple of miles from downtown.

The jobs he got building lesser structures only prepared him for the one that would be unforgettable. His son, H.W. Leaverton, remembers that the Lubbock Independent School District had asked for bids on a new high school building way out on 19th Street in about 1929. “I don’t know the exact dates, but i do remember that we stayed up most all of the night that the bids for the school were awarded. There was joy in our house because Dad had won the bid.” 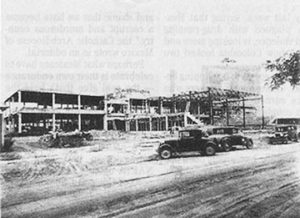 According to an article written for the Avalanche-Journal by Tanner Laine, bids were opened and contracts awarded in March 1930.
“D.N. Leaverton, Lubbock contractor, received the general contract on a bid of $463,870. Plumbing and electrical contracts ran the figure to $527,447.” Leaverton’s son, at age 10, became a water boy for the construction site, carrying an open pail of water and dispensing drinks with the same long-handled dipper for every man working.

But the Great Depression was taking hold of the nation, and Leaverton, who was determined to complete the building to the agreed-upon specs and level of quality envisioned, found himself running over the bid level. Leaverton began using his own money to finish the building. According to his grandson, Clay Leaverton, others of that time were declaring bankruptcy.

H.W. Leaverton said his father’s reputation was such that he could borrow enough money from banks to finish the job and his contract completely. “No such thing as bankruptcy ever entered his mind.”

Clay Leaverton said, “In order to finish the building, he sold everything he had, basically. Nobody would do that — they would have let the bank take the loan. But he did not do that. He paid everything back. And then you see the quality that everybody gets to enjoy. It’s really incredible.”

Lubbock High School’s new building was completed in 1931, and the first seniors to attend the school was the Class of 1932. Catherine Royalty is a member of that class. “We were so proud of it. 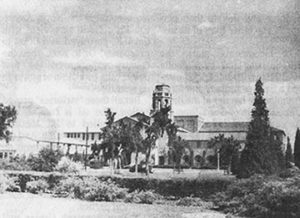 This rare photograph of the construction phase of Lubbock High School, shows the bare framework for what ultimately became one of the most beautiful buildings in Lubbock.

Each class that went into study hall had to keep a graph of our desks to see if there were any marks or carvings or anything of that sort. Our study hall teacher looked over them every day to see if anybody had mutilated anything,” she remembers.

“There was a great deal of pride, and I still think it is the most beautiful high school that we have. A lot of high school boys worked, doing physical labor to help build it — hauling bricks and things of that sort.”

She recalls that her class only had one reunion — their 50th year — in 1982. Because they attended school during the depression, they only had a paperback yearbook with just the seniors’ pictures in it.

The valedictorian for the 1932 class was Nancy Ruth Leaverton, the contractor’s daughter.

But fast forward to a later 50-year group of students at Lubbock High School — the Class of 1960.

“Everybody encouraged the school spirit. And even though we didn’t have winning athletic teams during my years there, we just had a great spirit — it was kind of all for one. 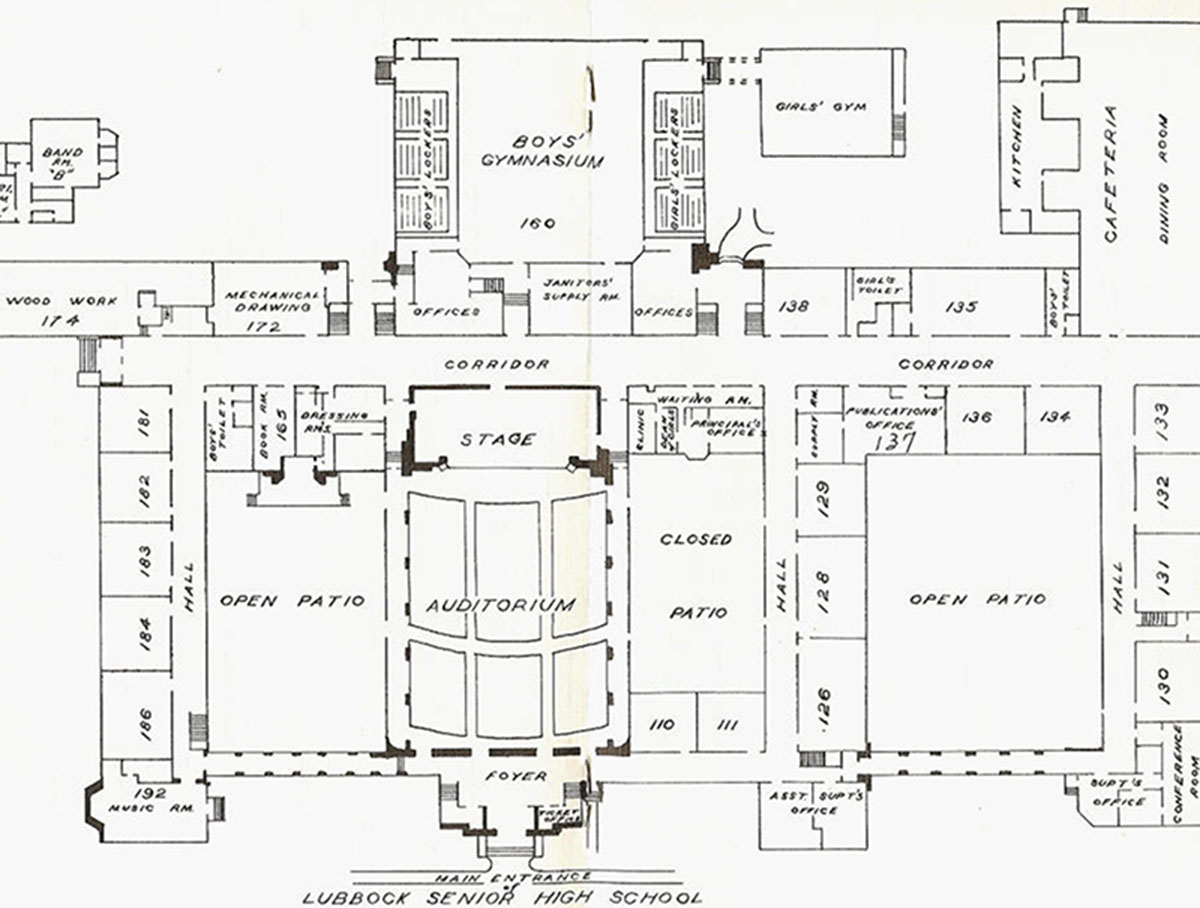 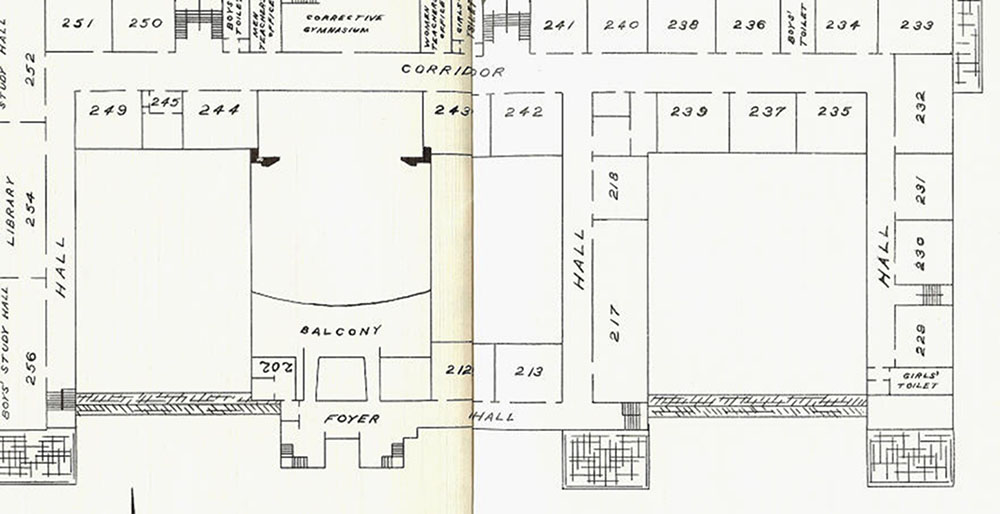 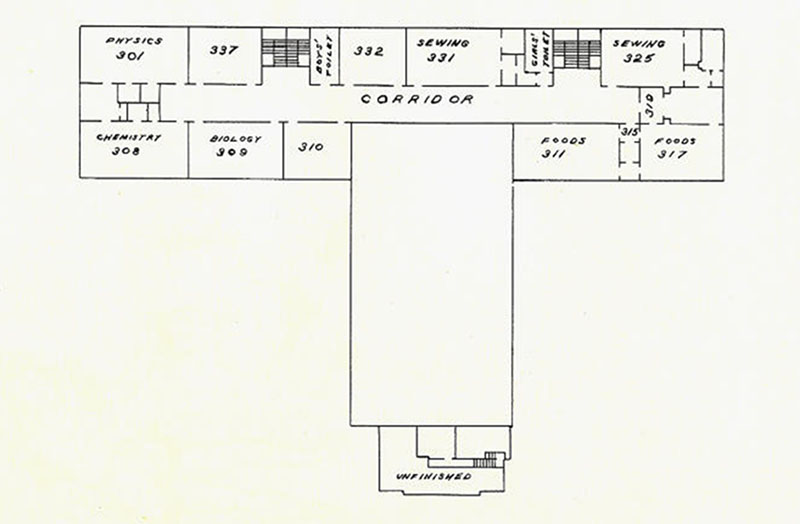